for further information on the NTC development/junior program email Patrick Kelly at: patrick.kelly@triathloncanada.com

All is well in Australia.  Good training, a few soggy days but mostly sun and heat. a few kangaroo sightings (one face to face) and some fast 100's in the pool. 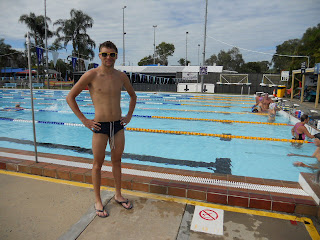 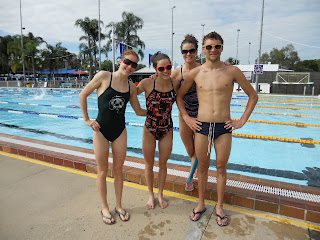 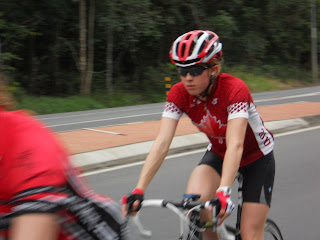 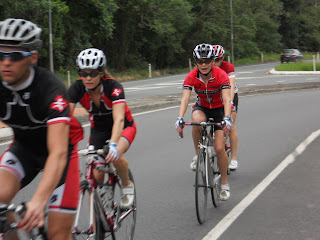 Is March the doldrums?
In 2007, a friend of mine, Ray Zahab, ran with two others, 7,500km across the entire Sahara Desert. They ran an average of 70 km per day for 111 days in extreme desert conditions through six countries to raise awareness for clean-water initiatives in Africa. I’ve heard him speak about it.  Many days were incredible and the people he met, and the things he saw were inspiring. There were also some days when, with each step, he said his mantra was, “this sucks, this sucks, this sucks, this sucks”.
I still remember training in February and March when my personal mantra was often “it’s a summer sport, it’s a summer sport, it’s a summer sport”.  The dark, rainy and cold days that we were training in did not match the weather of our summer rowing regattas. Not all of your sports are outdoor sports so the weather doesn’t affect you in the same way, but March and April I often found as the most depressing months. For all I did, I felt I wasn’t getting anywhere.
Coaches and trainers design winter training programs to fix and improve areas of weakness from the previous competition season. You are receiving constant critical feedback while, at the same time, the high training volume is physically exhausting. It’s so much harder to stay positive when you’re tired.
On top of this we try to multitask more at this time of year than any other, trying to squeeze in a little bit of school, a job, and maybe even a social life.
My point? Regardless if your training takes place indoors or out, with a team or by yourself, it may be hard to stay excited about your training right now.  The joy that you get when your body is competition ready, the sun is warm on your face and you’re fired up about what you could seem a distant memory. Right now, it’s neither summer nor do you feel ready to race. But that’s okay.
Think of the training you are doing right now as earning you bonus points! If competitors of yours get to train in warm, sunny conditions and you don’t, then you are simply getting tougher than they are getting.  If your competitors get more early-season competitions than you, then they are breaking up blocks of training time that you are using effectively.  What ever it is, whether everything is going smoothly, or if everything is an uphill battle, figure out a reason that this is to your advantage.
Take even the darkest, most boring training day and make it significant. You can take any day and make it boring, or, you can add a little salsa too it! It’s not about just making it through these doldrum days; it’s about making it through them better than anyone else.
This note is going out to over 700 athletes; you’re in this together.  Go Canada.
For more info on Ray check out www.rayzahab.com/about
Posted by PK at 3/02/2011 10:05:00 AM No comments:

A few bits of news:

Oh sooo far behind on blogging!! :(

Well.. were to start?  Maybe at the end and I'll do a better job in the coming year. :)

It's the end of the season for the majority of the team and some well deserved off season (rest, fun, fun, rest and maybe some school and easing back into training).   Fall start up -  Oct 1, 7:30 a.m. SCP.

2.  National Champs, Kelowna:  Matt - national junior champ, Paula national elite champ,  Simon - defending his national title in a thrilling sprint finish Kyle who made Simon work for the win and A-Russ who climbed onto the podium with an impressive third place finish.

You guys impressed this summer.  Be proud of your squad, all the work you've done and the fantastic results!     Get some rest.. have some fun.. lot's of work ahead for the 2011 season.  It will be good! 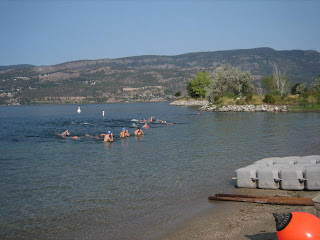 When Paula Findlay won in Hyde Park at the London Olympic Games venue she was shocked. She was just hoping to be in the top 15.
When the little redhead made it two-for-two in the World Championship Series on the challenging cobblestone of Kitzbuhel, Austria, she said she surprised herself again.
She was just hoping to be in the top 10.
Disappointed
Sunday in Budapest, in the Grand Final of the series, the 21-year-old, who along with the curlers and moguls skier Jennifer Heil are keeping the City of Champions signs up in Edmonton, finished fifth. And was disappointed.
“She had some emotion today,” said coach Pat Kelly via cell phone as Findlay headed to doping control after finishing only two seconds off the podium and what would have been a third consecutive medal in her third race with the big girls.
“She was a bit emotional with her family at the end. She really wanted to be on that podium,” he said.
“In my mind it was quite important she did what she did today. She showed she wants to win every time. The bottom line is that it was an outstanding season. Once she’s able to put it in perspective I’m sure she’ll see that.”
Chris Dornan of Triathlon Canada was with her outside doping control for what turned out to be a long wait.
“We have a fighter here,” he said via BlackBerry email while he waited.
“We have a rookie that nobody knew two months ago, a girl who shocked the world twice. She entered this race as a favorite and finished the race fifth. But she was dejected. She wanted the podium.
“She was way back and fought all day. She had a bad swim, fought back to lead on the bike, fell back on the run and then turned on the jets to fight for the podium. She leaned over, exhausted after giving everything, water and sweat pouring off her. She was emotional but more angry like a veteran who wanted more and felt like she could have delivered more yet was absolutely fantastic.
“It was a hell of a gutsy performance. She said she had to fight harder for this fifth than her two victories.”
Finally out of doping control and holding an award from the International Triathalon Union identifying her as World Championship Series Runner of the Year, a fifth-place cheque for $9,300 and fifth-place series cheque of $16,000 — making it a bigger payday than her cheques of $18,000 from both London and Kitzbuhel — she called your correspondent on Dornan’s cell.
“That took forever,” she said of her trip to drug testing.
But she said it had allowed her time to think.
“My expectations totally changed after the two wins. It changed the expectations of others, too.
“People were expecting me to podium. But after having a little time to think about it in there, now everything is in perspective. I’m thrilled with my results.
“Initially I was pretty disappointed. Today was really hard for me. Thirty seconds before the swim my strap broke on my goggles. I wear contacts. I couldn’t go without them. I had a referee tie a knot on the strap and my heart rate had to be 200 I was so stressed out when I hit the water. There was so much drama there that my swim was really bad. I rode the bike really hard to get in contention but I was seven seconds back most of the run.”
There has to be some second-guessing at Triathlon Canada for waiting so late to get her into the seven-race series. With two more results she could have won it all.
“If I’d have been in the top five in two other races, I’d have been right up there,” she said of being the world champion today. “But it’s OK. It’ll give me more motivation for next year.”
A case of timing
Kelly said it was a case of timing.
“Paula came out of school in February,” he said. “Almost all the competitors in the series are full-time. She started a little late into full-time training.”
Her coach sees a young girl who is ready to go back to her old life in Edmonton for a while before she returns as one of those full-time pros earlier next year.
“I think she’s looking forward to going home, sleeping in her own bed, going back to school and resuming her old life for a few months,” said Kelly.
“Yeah, that’s for sure,” said Findlay. “It’s hard living on my own. I like living at home. I like being with my friends at home. Victoria is an awesome training environment, but it will be a nice mental change to come home until going back full time in January,” said the U of A student who will return to class for four months early this week after 18 hours study on the way home.
While she’s been home for four days here and three days there, she’s now going to be home as Paula Findlay, international sports star instead of the girl next door.
“It’s a little different, but pretty cool. I like it.”
terry.jones@sunmedia.ca
Posted by PK at 9/13/2010 06:28:00 PM No comments:

a few pics from stage 14 TdF 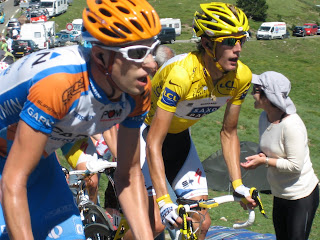 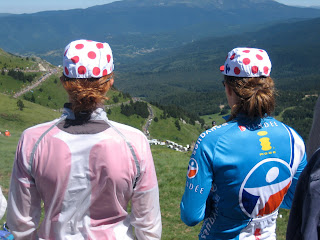 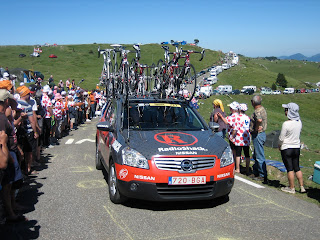 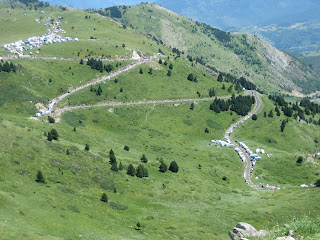 Focused and Ready to Race!!! 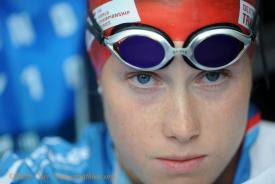